Email Us Email Us
Sharing tools)


SGS ran a workshop and delivered a presentation on the benefits of the Protect and Sustain standard to the International Fertilizer Association’s Global Safety Summit in Jordan.

Jeff Dowson, Global Head of International Sales and Accounts, SGS, hosted a workshop and delivered a presentation on the benefits of the Protect and Sustain standard to delegates at the IFA's Global Safety Summit in Amman last month. The Safety Summit attracted 120 executives from over 20 countries.

At the same event, three companies received certificates from SGS recognizing their successful audits against the Protect & Sustain standard. 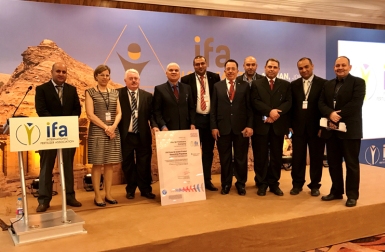 Protect & Sustain is a tool developed by the IFA to help its members to satisfy the health, safety, quality and security aspects of their business and increase profits, since 2010. Written by the fertilizer industry, with support from SGS, the standard’s aim is to boost best practice among its members. SGS has also been an approved audit body since 2010.

The IFA Global Safety Summit attracts delegates from more than 30 countries to learn about the latest safety, health and environment (SHE) developments in the global fertilizer industry. During this four-day event SGS’s Mr. Dowson participated in two key events, a workshop helping member companies understand the Protect & Sustain standard, as well as the presentation to conference.

Find out more about the IFA’s Protect & Sustain certification >

About the International Fertilizer Association

The International Fertilizer Association (IFA) is the only global fertilizer association with a membership of more than 500 entities, encompassing all actors in the fertilizer value chain: producers, traders, distributors, service providers, advisors, research organizations and NGOs. IFA promotes the industry’s engagement in sustainable agricultural practices and the efficient and responsible production, distribution and use of plant nutrients to advance global food security and sustainable development goals.

Learn more about the IFA >

SGS is the world’s leading inspection, verification, testing and certification company. SGS is recognized as the global benchmark for quality and integrity. With more than 90,000 employees, SGS operates a network of over 2,000 offices and laboratories around the world.

Sign up to SGS publications and newsletters from your region and around the world.